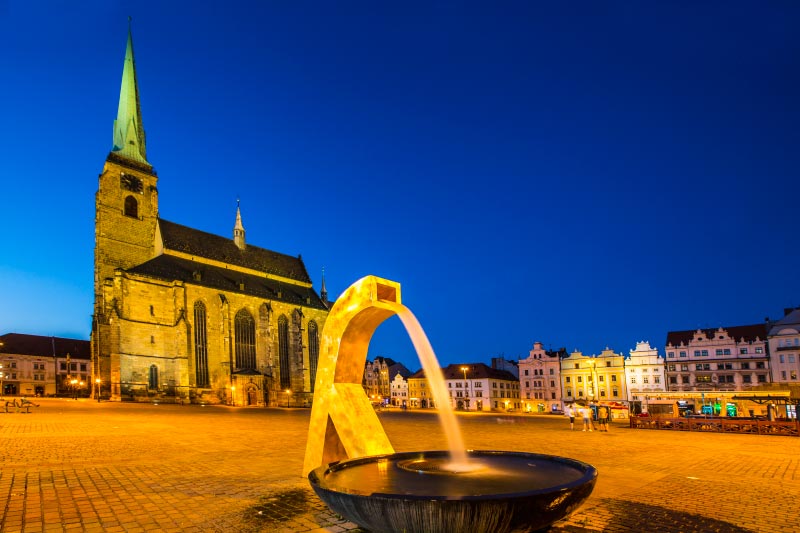 The beautiful Gothic cathedral of St. Bartholomew with the tallest church spire in the Czech Republic dominates the Pilsen central Square of the Republic. You will find there a wide range of amazing historical buildings with a lot of restaurats and cafés. During the whole year there are held dozens of cultural events, festivals and celebrations. Traditional seasonal markets and farmers´ markets take place there too. At the time of the city foundation the square with its dimensions 139 x 193 m was one of the bigeest in Europe. These days this square boasts three gold modern fountains, which represent heraldic figures from the Pilsen emblem –an angel, a camel and a greyhound. At the square and its surrounding area there are several museums, galleries and other treasured historical monuments, which are worth visiting. It is also pleasant to spend time sitting on benches and walking in nearby municipal parks. 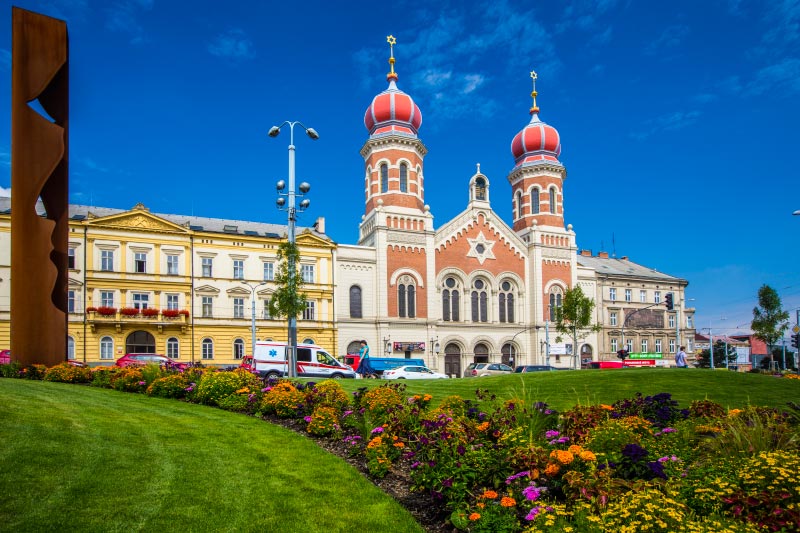 The Great and Old Synagogues

Jews have been living in Pilsen region since the 14th century. During the centuries there have been five Synagogues in Pilsen, only two of which have been preserved and exist today - The Old Synagogue, which is located in the courtyard of the houses in Smetana´s Parks (originally there used to be a Jewish school too, but now in its place you can find an unusual memorial to holocaust victims) and the Great Synagogue.

The Great Synagogue was built in Moorish-Romanesque style in 1893. It is the third largest synagogue in Europe (and the fiftth biggest in the world). It is evidence of the rich Jewish community in Pilsen, which was unfortunately almost all anihilated during the Nazi occupation in years 1939 – 1945. The historical building was renovated at the end of the 20th century and, as well as for religious purposes, it also serves as a concert and exhibition hall due to its excellent acoustics and a unique atmosphere.

The newly reconstructed Great Synagogue is located in a walking distance from the Old Synagogue. It is hidden in the courtyard nearby Smetana´s Parks, so it can be easily missed but it is really worth visiting. 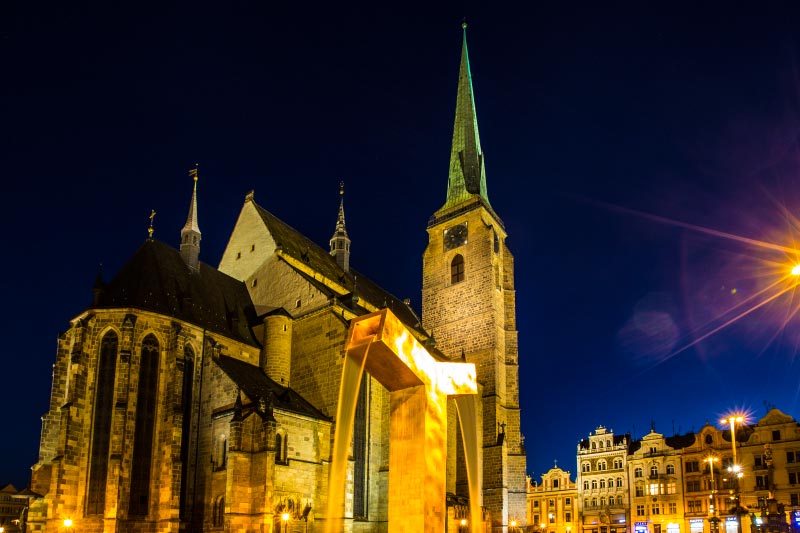 The structure that really dominates Pilsen is the Cathedral of St. Bartholomew. Its building started together with foundation of the city and it was completed at the beginning of the 16th century. The cathedral is a national monument as well as housing the argillite statue on the main altar - the famous Pilsen Madonna. The statue represents the so-called “Beautiful style“ of the Gothic period. The Cathedral boasts as having the tallest church spire in the Czech Republic (102,6 m). From its galleries you can see the entire city and its surroundings from the height of 60 metres. The Šternberk Chapel with the overhanging roof bolt dates from the 1st half of the 16th century. In 1993, Pope John Paul IInd established the Bishopric in Pilsen and St. Bartholomew became the cathedral. The statuary on the outer eastern side of the cathedral shows Christ on the Mount of Olives protected by a number of little angels, one of which will fulfil your secret wish according to the legend. 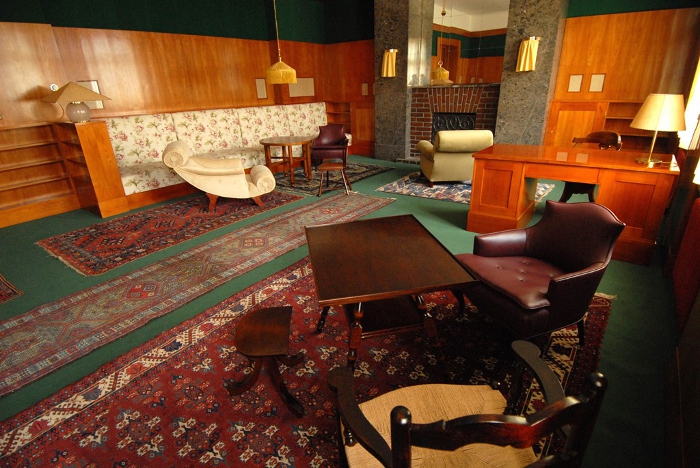 The unique architectonic gem, which was created in Pilsen by a world-famous architect Adolf Loos in the 30´s of the 20th century for rich investors of the Jewish community, is a collection of eight apartment interiors. Apart from experiencing the extraordinary first-republic design the guided tours of the Loos Interiors provide an interesting inside view into the life style of the Jewish community at the time of the origin of the interiors. Each of the interiors hides its own story of the fate of the families which lived there. But the Loos interiors are not only the reflection of the period when they were made. The stories of their inhabitants simultaneously illustrate historic event of the Second World War and consequently of the Communist regime as well. 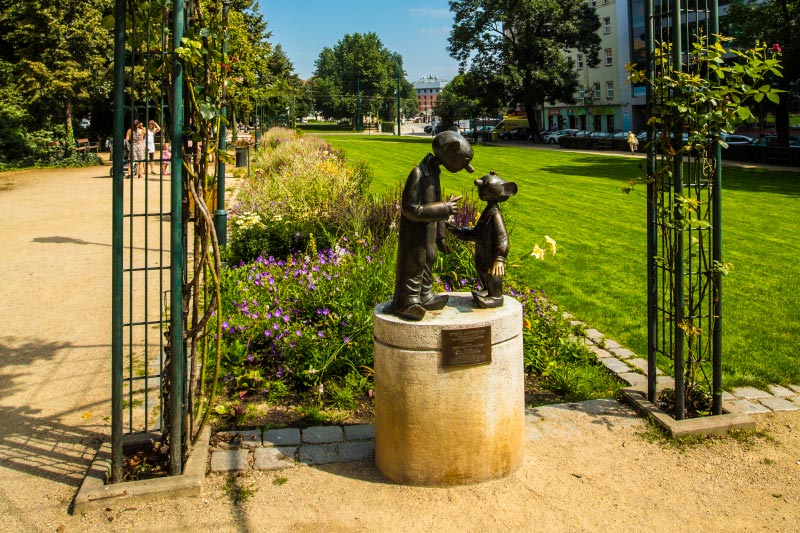 The municipal parks, which arose on the site of former municipal walls, surround the historical centre of the city. There, the visitors may spend their time on pleasant walks or sitting on the park benches or visiting one of the nearby cafés or restaurants. During the year a lot of cultural events and festivals are held here. The parks are surrounded by several interesting historical buildings. You will find the statues of prominent Pilsen personalities including the famous puppets Spejbl and Hurvínek.